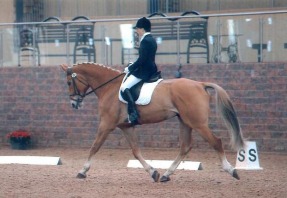 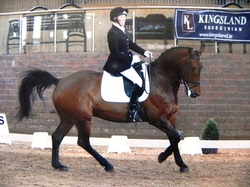 May 2012 has started very sucessfully with Anna competing Niall Quirk's Tintoretto S, in the Medium Championships at Dressage Ireland's National Winter Finals in Cavan Equestrian Centre. Anna and Tintoretto S  finished in 5th place after Day 1 on 65.5%. In true style Anna bettered their day 1 result to finish in 2nd place on 67% resulting in an overall 3rd place in the Medium Championship. This also means that Anna and Tintoretto S have qualified for the Dressage Masters Championship in Hickstead in July 2012. There is an exciting summer ahead! 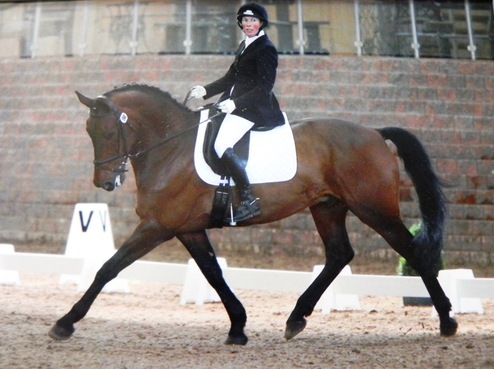 The past few months have been busy preparing riders and their horses for the 2012 competitive season.  Anna attended a SJI selection day at Ennis Showgrounds in March. The top twenty riders went through to the SJI National Training Clinic at Barnadown, Co.Wexford where Anna went on to coach the flatwork. She was very impressed with the high standard of riders and their horses and looks forward to seeing them out competing in 2012. Anna has also been in Portmore Equestrian Centre in Belfast coaching flatwork for Ulster SJI Region, ponies and horses. Aswell as SJI,  Anna is busy preparing Eventing Ireland, Pony Club and Riding Club members and again looks forward to seeing some great results this year from all these riders.

Aswell as coaching Anna has had some very talented young horses in for schooling and looks forward to bringing them out and about this year to compete. Niall Quirk's Tintoretto S was very successful at South Munster Dressage competition in Bridestown recently with Anna, scoring 65% in their first day out in 2012. 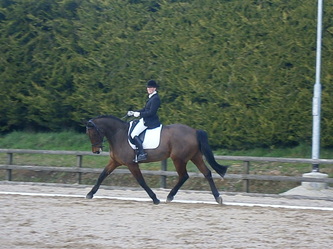 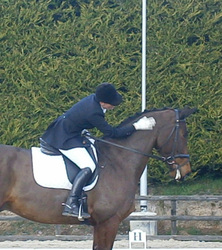 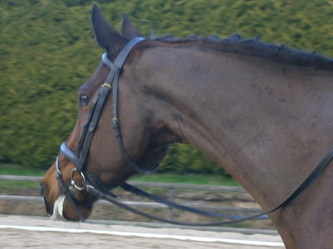 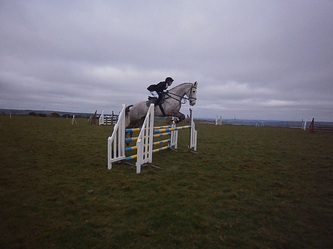 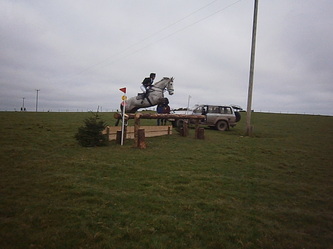 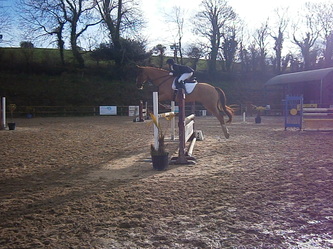 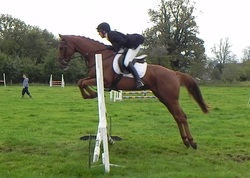 Anna and Step out Style, 3rd at Grove
Anna and Mary Condon's chestnut mare Step out Style finish the eventing season in style in 3rd place at Grove in a large Intro class. Anna and Diamond Ivy also finished in 8th place. More news to follow shortly as the competition season winds down... 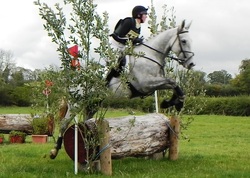 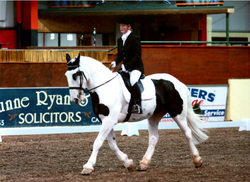 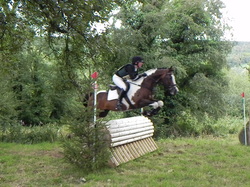 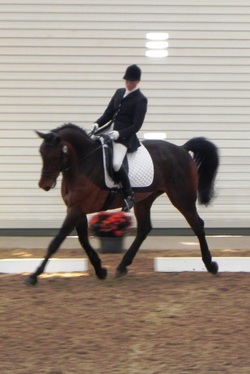 Anna & Tintoretto S 4th at Winter Finals
May, June and July saw the increase in competitions, training and the eventing season getting into full swing. As a trial Dressage Ireland and the organizing committee of the Cavan Dressage Festival decided to merge the Winter Finals and the Cavan Festival for 2011. Anna had horses competing in the prelim, novice and elementary classes with each horse finishing with successful results. Highlights include Anna and Caroline Broadhurst's coloured stallion Killeatin Top Cat  finished 4th in the Novice Championship Class in the Winter Finals with scores including a 70.6%.  Anna and TC continued their success in the Cavan Festival finishing in 3rd place. Anna and Niall Quirk's Tintoretto S finished in 4th place in the Elementary Championships in the Winter Finals. This was Anna's and Tintoretto S's first finals together. Anna and Rebel Royale won their novice class on the Sunday with a 66.92% which set them up to finish in 6th place in the Novice Championship in the Cavan Festival.

Marlton Summer Festival in June was yet again a successful venue for Anna. Anna  finished the Novice Championship with two horses in the top three - a remarkable achievement. Anna and Kileatin Top Cat finished in top spot with two 69% with Anna's own Maiblume finishing in a close 3rd with 67.5% and 68%. Anna and Kilkeany Kingsway finished in 4th place in the preliminary championship.

In between competing Anna has also been kept busy coaching. In July Anna taught at South Union's Pony Club's Summer Camp and the following week at West Waterford's Pony Club Summer Camp. Anna also coached flatwork at the SJI Munster Region training at Maryville. Anna's clients, family and friends are also enjoying success competing this summer. Maire Scanlan and her mare Breacadh have qualified for the AIRC national horse trials in Annaharvey in Septemeber and also recorded a well deserved win at Lismore Riding Club's ODE in Boulta recently. Liz Fleming and Boola Boy have qualified for Dressage Ireland's National Championships in Cavan in September after achieving two qualification scores in two shows with scores including 67.6%. James Dangerfield and William notched top spot in his first jump off class in the Ballyrafter Centre LTD June Bank Holiday show with Charlotte and Apollo finishing in 3rd place - both riders and ponies coming out of their speed class with huge grins!!

Anna & Rebel Royale 2010
All at Knockananna Equestrian would like to wish Hickstead 2010 champion Rebel Royale (Belle) and her owner Sarah Morton best of luck as Belle takes some time out from the competition circuit to have a foal. We look forward to having her back competing and continuing her success in the near future.

Our Star is born!!
We are delighted to announce the arrival of our beautiful healthy filly foal by Ricardo Z on 12th May 2011.  Star is her pet name and what a pet she is!! 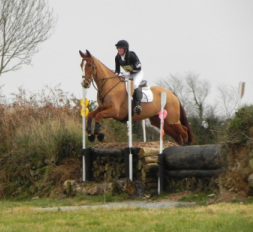 Anna on her own Greystones Sardius
February, March and April 2011 have continued to be busy and successful months at Knockananna Equestrian with various training clinics, coaching and an array of red rosettes and placings for many of our own and client’s horses.

Niall Quirk kindly came to Knockananna Equestrian for a dressage clinic in February with every horse and rider combination leaving the arena with a smile on their face.  Anna on top of her own coaching has regularly coached at SJI training clinics, brought clients XC training, started many young horses and also has been competing regularly.


Highlights of Dressage Events include:


In between all the dressage shows Anna and Greystones Sardius have been preparing to compete at 1* level. Anna took Greystones Sardius to Eventing Ireland’s Ballinaclough Event on 17th March and finished 2nd in their first ever 1* event on a 38% dressage test with clear SJ and clear XC.  Later in March at Eventing Ireland’s event in Ballindenisk they finished in 5th place in a highly competitive class.

Anna’s friends, family and clients have also been enjoying the 2011 competition season. John Fenton and Rames Rhythm, in Febraury  finished 4th at Skevanish. Richard and James also had their first Dressage outing on Dream on Lady and Pragnells William in Skevanish. Marie Sheedy on OCS Hallo Gamble began their dressage career in style finishing third on 62% at North Munster’s Regional Finals in Clonshire. Liz Fleming and Boola Boy finished 4th  on 62% in their first Dressage Ireland outing in February at Dohyle House Stud.  Gerard Curtin and Dolores O'Donovan finished in 4th and 5th places respectively at their first Eventing Ireland event at Fort Arthur in March. Darren O'Connor finished 2nd in the Sportmans class at Eventing Irelands event in Ballindenisk in March. 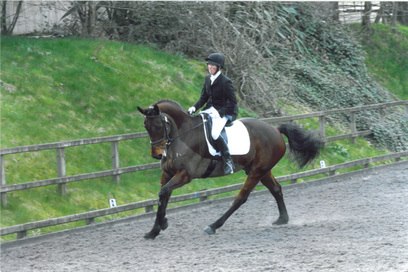 Wishing you all a happy, healthy and succesful 2011!

January has been a busy and successful month at Knockananna Equestrian. The Ballyrafter Centre LTD. ran their postponed Christmas 2010 horse finals where Anna finished 2nd in the 8Ocms class on Emer Mulcahy's Polly.

The pony finals were also held the same weekend and Charlotte Dangerfield won top spot on Knockananna Apollo in the 5Ocms class and James Dangerfiled finished in a close second on William.

South Munster Dressage also held their rescheduled Autumn League Final and Christmas Show at Maryville Stables, Carrigaline, Co. Cork in January. John Fenton enjoyed his first outing on his new young horse in the Preliminary Class.  Anna won the Novice class on Caroline Broadhurst's coloured stallion Killeatin Top Cat with a qualifying score of 66.78%.  Anna and Killeatin Top Cat also finished in 3rd place in the Elementary class with a score of 62.14% With these results combined with a successfull outing to Skevanish last November, Anna and Killeatin Top Cat are now qualified for the Winter Finals to be held on April 29th and 30th in Cavan.

Paddy Meaney's Goldie Fox made his showjumping debut in the Autumn league run by The Ballyrafter Centre LTD.  After only recently being started and backed by Anna, Goldie Fox jumped a superb clear second round in the 70cms class like a real pro and will definitely be a star to watch out for in the future!

Ivy,  also owned by Paddy Meaney, got straight back into the swing of jumping recently in the Autumn League with a lovley double clear in the 8Ocms class. Ivy is moving up through the classes after coming 2nd in the 70cms class in the Spring League with Anna. Ivy will progress shortly to the 90cm class. 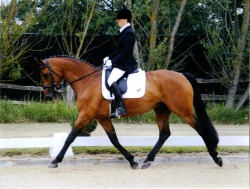 Link to Horse and Hound Article
Link to Avondhu Article 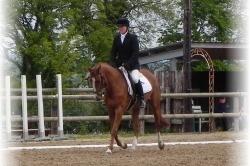 Aine O'Brien on Raymond O'Brien's Claragh Love, Caroline Broadhurst on her own Kileatin Top Cat and John Fenton on Anna Dangerfield's Greystones Sardius will be heading North to Cavan Equestrian Centre to compete in Dressage Ireland's National Championships in September. All three riders have trained intensely under Anna's guidance to gain their qualifications. Qualifying scores include Aine achieving a fantastic 74.21% in Clonshire, Caroline with a fantastic 65.20% in Skevanish and John with a fantastic 69.5% at South Munster Summer Festival in Maryville. 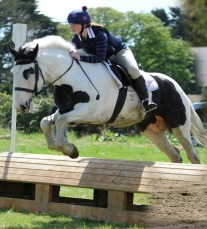 Liz Fleming on her own Boola Boy has qualified for the AIRC National Horse Trials Championships to be held in Annaharvey Farm, Offaly in September.  Liz and her horse Boola Boy competed in their first ODE recently in Ballindenisk, after training under Anna's guidance since late 2009, and finished up 4th on 37.4%, qualifying for the nationals. Liz also had a great win recently at Earlswell ODE finishing in top place on a dressage score of 32.11% 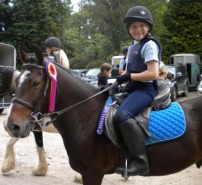 James and Charlotte Dangerfield have been out and about competing recently and enjoying their sucesses in Showjumping and Dressage Ireland coming home with rosettes and some lovely prizes. James, 10 and Charlotte, 8 are competing in The Ballyrafter Cente Ltd. training shows achieving many double clears and getting placed in the Summer Panda League. James and Charlotte have also competed in Dressage Ireland's Mini Trailblazers competitions in Maryville and Bridestown.

Aine O'Brien has qualified for the HSI Silver Spurs Semi Finals in Marlton Stud in August on Anna Dangerfield's Maiblume.  HSI and Dressage Ireland held qualifiers throughout Ireland with the overall top placed 14 riders going through to the semi finals. Aine trained under Anna's guidance and qualified at qualifiers held in Clonshire and Spruce Lodge.  Aine, only in her second season competing in Silver Spurs, finished on a remarkable third in Spruce Lodge on Maiblume qualifying for the semis and also finished 5th on Raymond O'Brien's Claragh Love.
Lismore Riding Club finish 2nd and 4th at Horseware Team Showjumping Qualifiers

Lismore Riding Club members trained under the guidance of Anna Dangerfield for the Horseware Team Showjumping South West Region Qualifiers held in May in The West Cork Equine Centre in Bandon.  Anna decided on two teams to go forward to the qualifiers. Both teams jumped brilliantly and a strong second round performance by Ian Hannon,  Marie Smiddy, Kathleen Cowhig and Christine Harte allowed them to finish in 2nd place .  While on this occasion they did not qualify for the finals at the RDS, this team had a second chance to go forward and qualify at the TRI Equestrian Horseware Wildcard Team Showjumping Championship Qualifier held at the Riding Club Festival in Mullingar. Again this team jumped brilliantly with all riders having a clear first round and they finished in 4th place on 4 faults.